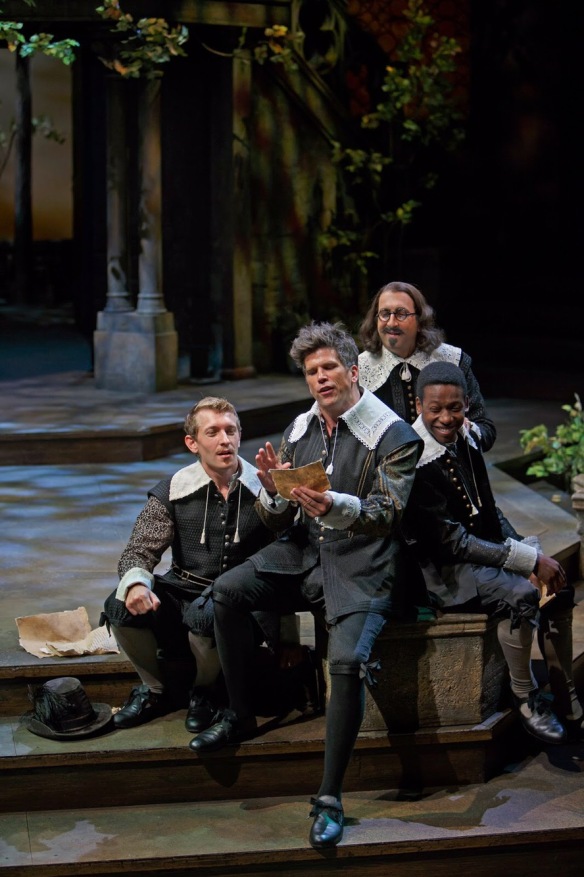 It’s often said that Poe invented the detective story, while Doyle’s Holmes Canon was responsible for immortalizing and popularizing it. However, I recently went to see Shakespeare’s Love’s Labour’s Lost in the cinema, an excellent production by the Stratford Festival in Ontario, and my reintroduction to that play reminded me how much of what we would call detective work is in Shakespeare’s plays.

The character of Boyet acts as a detective on behalf of the Princess of France, ferreting out the plans of the King of Navarre and his nobles. In service to his own passions, Don Armado investigates and uncovers an affair between Costard and Jacquenetta. The princess and her ladies perform detailed analysis of the letters received by their suitors as part of the comedy’s elaborate wordplay, and their meticulousness is worthy of a Holmes brother.

This is just one of a number of Shakespeare plays that contain conspicuous elements that fall under the heading of detection, for where there’s a mystery to solve by the end of the play, there must be at least one character functioning as a detective to solve it. Some even use their skills for nefarious purposes, like Othello’s Iago, an excellent sleuth who uses what he deduces to destroy lives.

I’ve heard and read many theories about the enduring popularity of Holmes and detective stories, but Shakespeare is a reminder that the popularity of mystery and elements of detection did not arise out of a Victorian vacuum. They were around in popular media long before, and if Holmes is ever to be forgotten, they will no doubt continue after.

Life presents the adult human with constant mysteries to endure, some of which we can solve, others of which we will never be able to fully grasp. Mystery stories are comfortingly escapist because they present solvable problems and the characters with the necessary skills to solve them. Whether or not they’re called mysteries and detectives, several of Shakespeare’s plots serve this function. He wasn’t the first, and Doyle certainly isn’t the last, great author to interpret and make sense of life through the mystery lens. Detection is always found where mystery is found, which means the human race has never lacked detectives, regardless of what they were called.

How to purchase my Sherlock Holmes novels: