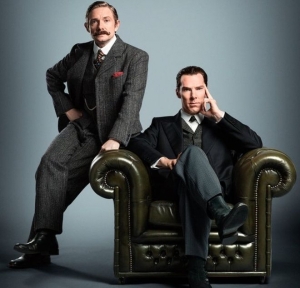 This past weekend brought a strange and wonderful gift to fans of Sherlock Holmes, the first clip of Sherlock’s Christmas Special, an episode set entirely in the Victorian period.

Most reactions to the footage that I’ve encountered have been positive, including my own. There’s something charming about seeing the versions of Holmes, Watson, and Mrs. Hudson that we’ve come to love in the modern era suddenly swanning about in Victorian London.

But there’s something weird about it, too. Suddenly, it’s not 2015 Sherlock Holmes who feels like the AU of a Victorian original; it’s Victorian Holmes who feels like a period AU of a modern character. I realize I’m getting very meta here, but I’m trying to describe the slightly strange feeling I had when the clip came out. For once, I think, I had the experience of fans who met Holmes first in the BBC version (or Elementary) and then went back and met the original.

I’d like to say I gleaned a whole bunch of Sherlockian wisdom from this, but I really didn’t. What sticks out to me is the overarching truth that Holmes is a character universal in time and place. It really doesn’t matter where you put him; he’s still Holmes. I sometimes wonder exactly where we might be headed with him, now that the “Holmes renaissance” is giving way to something else–an era where Holmes mania is less of a fad but more of a cultural staple. I’m not very worried, though. What Benedict Cumberbatch in a deerstalker reminded me of this weekend is the fact that Holmes isn’t going anywhere, and he’s not changing into a different person. As he once said about his friend John Watson, he’s a fixed point, no matter how much the age around him changes.

Oh, and I can’t wait for Christmas.

How to purchase my Sherlock Holmes novels: