Now, Children, begins the magic union of narcotics and possibly the single greatest piece of Sherlockian media of all time, Sir Arthur Conan Doyle’s Sherlock Holmes by The Asylum.

I had major surgery last week. I bet it hurt less than watching this will.

1940. There is music and effects. Dr. Watson is still so awesome or stupid that he stays at the window to watch bombs. Miss Hudson is his minder. What a subtle sledgehammer of a nod to the canon.

I’m thinking this part is probably better than the flashback coming up.

Ohmyword, I see someone’s train station model that they dug out of their basement.

Surely the meds are making me hallucinate the horror of this soundtrack.

There is a man smoking and looking at water. The lower sailors look dressed like Edwardian schoolboys.

If you shake the camera, it really adds something. Namely, it adds confusion so the viewer can’t see how bad the shots are.

Gareth David-Lloyd, baby, why? They couldn’t possibly have paid you more than a perfectly legitimate Pepcid commercial.

Holmes has already said “Elementary.” So far, the “subtlety” is the most impressive thing about this.

You’d think a doctor’s salary would spring for clothes that at least sort of fit. But no. The Asylum is too pure for such things.

Mr. Styles’s idea of acting is to stare with a wide-open mouth.

I think this would be a lot better if it was about Lord Byron impersonating Sherlock Holmes, which is what it looks like to me.

Actual sound editing would have been grand.

Mycroftian reference. Also, apparently The Asylum only pays for your face to have expression when you’re actually speaking.

Did they actually pay Gareth to act more terribly than ever? This man is a good actor! What happened?

I don’t even understand what “take” this is on Holmes other than Sherlock Keats. He’s so soft and emo and pointless.

Surely short pants were all the rage for the grown men of this period.

There is a dummy in some water. Watson, plastic puppets can’t talk. You should know this.

There are ropes, and this scene is boring and endless, and Holmes is unbelievably lame.

This East End set looks like they redressed the vestibule of the studio, and this blond boy looks like a lost member of One Direction.

The lesson here is that if you solicit prostitutes, you will be eaten by dinosaurs. This film is more pro-social than I expected.

London, that vast metropolis that consists of one street and Big Ben.

Holmes has the hair of an infant boy whose mother is too sentimental to take him to the barber.

Also, I’m sure black bow ties at breakfast was standard in 221b.

Watson is the skeptic. Ok…

They have exactly four extras.

Ohmyword, there’s a man hopping around screeching. And no one cares.

Holmes and Watson run and run some more. There is much staring about a wooded area. How can this be so actiony and so boring at the same time?

Oh look, our chase results in…

There was this place we went when I was a child that had large animatronic plastic dinosaurs. I think this film borrowed them.

Now Watson walks around and looks at a heritage site for ages.

If this was a Doctor Who episode, it would be a lot less terrible.

Dinos are stealing water pumps! This is right up there with Milverton, let me tell ya.

Ohmyword, this girl looks like a goth wedding cake threw up on her.

I could do better hairstyles than this.

Surely this actress is American. Her accent is so horrendous.

Sherlock Keats skips in, after writing “Ode on a Plastic Dino.”

Holmes is such a little twerp.

Watson’s little gut pooching out under his waistcoat is its own character.

My church’s Easter Production sets look much like this.

Watson has a gun. I’m not sure he knows how to use it.

Oh look, another dinosaur. I think that’s #4, but I sort of lost track.

This child Newsie is wearing an outfit currently available at my local Hot Topic.

Gothic cake girl’s costume isn’t even fastened in back. We’re reaching new levels of not giving a care.

Ok, I’m ready to punch Holmes for his affected way of talking.

Suddenly Holmes is a crusader for social justice suddenly. Or something.

Someone wrote this script and got paid for it. I had to take a moment to remind myself.

There’s a guy and some gears. Maybe he’s coordinating a steampunk event.

That right there is the fakest fake blood I’ve ever seen.

More running, this time in The Country. I thought the new Russian series had a weak soundtrack. This is making that sound like John Williams.

“Show, don’t tell” is just a silly rule. The Asylum does not follow silly rules. Obviously. Since they just have Sherlock Keats tell us everything.

And now we see that they managed to get permission to film in a castle. But only if they used no lights?

I have read that it takes like two weeks to film these things. I’d have said two hours.

Poison gas. Because no one’s ever done that in a Holmes story before.

The real villain of this piece has to be Watson’s tailor.

Oh look, another dinosaur. It’s like in Nicholas Nickleby, when Mr. Crummles tells Nicholas that he’s bought a tub and some pumps, so Nicholas has to write them into a play as much as possible.

There is a robot made of what looks like gold-painted paper. I did not imagine this could get worse. Silly me.

The robot is Mycroft. *cries*
Hey, what??? Mycroft called Sherlock “Robert.” WHY?

Did they even call them corticosteroids and immunosuppressants at this point?

Mycroft: I control the movements of this synthetic arm…with my mind!

I’m going to use this from now on. “I eat this cup of applesauce…with my mind!”

Holmes is seriously so fail. Like, Watson could just do it all himself really.

Well, this Mycroft is certainly not asexual. But he kisses terribly.

So basically, the dinosaurs were virtually pointless to this overall story. Given the sheer excellence of the rest of this production, I’m sorely disappointed.

Holmes has decided to be useful. For once.

Oh, the feels. I feel for the strain on Watson’s waistcoat.

And a dude is playing an accordion.

Here we are! Here! It’s the moment of Holmes-in-dirigible!

Oh hey! They’ve dressed up the whole crew to make it look like London has at least six inhabitants!

These digital effects, they are special.

There’s a flying metal dragon atop Buckingham Palace. This truly is the greatest adaptation ever.

Gothic cake girl appears to be a robot. That explains the horrendous acting.

Gothic cake girl has been deactivated!

Mycroft has crashed and exploded but is somehow still alive. And is shot by Holmes. Which would be a moment of great pathos if anyone could act.

Holmes and Watson never spoke of this again? Because it was so lame?

Ok, so the whole explanation is that his name was Robert Sherlock Holmes? Ok.

Old Watson died from telling that. It literally bored him to death.

Well, I made it. There you go, the greatest adaptation starring tiny waistcoats and romantic poets posing as detectives. 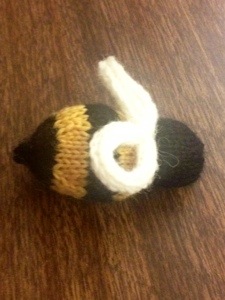 On Wednesday, May 7, after a long battle with Crohn’s Disease, I’m having major abdominal surgery. The picture above is of my recovery mascot, Mycroft the Bee.

In order to keep Mycroft from getting bored (he holds a minor position in the knitted bee government), I’ve decided to use my recovery to watch and review Sherlock Holmes screen adaptations.

Here’s where you come in. I need YOUR suggestions of which adaptations I should watch. Maybe it’s your favorite. Maybe you’ve never seen it but would like to read a review. It’s all fair game; just leave me a comment or tweet me @Pickwick12 or use hashtag #221BeeWell

Remember, the happiness of Mycroft the Bee depends on you (and I appreciate you too).

p.s. I’m planning to start this off by liveblogging Sherlock Holmes by The Asylum (aka the greatest adaptation ever) while on post-op painkillers.

How to get my newest book:

How to get the previous two books in the series: