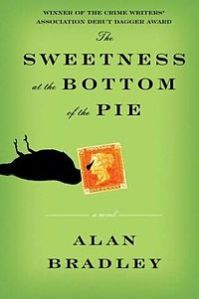 The other day, a Sherlockian friend asked me a question that got me thinking about a slice of the Holmesian world that I don’t concentrate on all that often: Namely, pastiches that are literary crossovers with other fictional universes.

When I wrote The Detective and The Woman, I treated Holmes as real, and I included my own dream meeting of Holmes and Thomas Edison. Other authors have done similar things. Laure R. King, for instance, has Holmes meet Dashiell Hammett in one of her books.

Some authors, though, take Homes further into the world of imagination instead of placing him in the real world, crossing him with Dracula, the Phantom of the Opera, and more.

My friend’s question to me was which crossover I’d pick if I was coming up with one, and my answer was Flavia de Luce, the pre-teen detective heroine of the wickedly hilarious mysteries by Alan Bradley. Though separated by time periods and decades of age, Holmes and Flavia are actually quite similar in character in some ways, and I’d love to see what they would make of each other.

Now it’s your turn. If the sky was the limit, which fictional character or universe would you cross with Sherlock Holmes?

Holiday season is upon us! The Detective and the Woman is available from all good bookstores worldwide including in the USA Amazon,Barnes and Noble and Classic Specialities – and in all electronic formats including Amazon Kindle , iTunes(iPad/iPhone) and Kobo. Grab it now before the sequel launches February 13th, 2013!