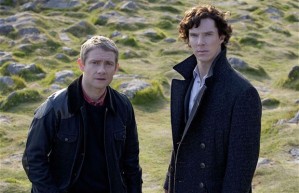 “They say it is the cry of the Hound of the Baskervilles.”

—The Hound of the Baskervilles

Mother’s Day in the United States marked the airing of Mark Gatiss’s take on the classic Holmes novel The Hound of the Baskervilles. For Holmesians, this story is one of the most significant in the entire canon because its publication marked the first official hint that Sherlock Homes might not be gone for good, and it bisected the time period between The Final Problem and The Empty House.

Gatiss’s reimagining is an intriguing mixture of specific homages and major changes to the original story, filled with exact quotes and plot twists, but also with characters whose genders and roles in the story have changed significantly. The tone of the episode feels very different from the other five in the show’s canon, just as the novel reads quite differently from Doyle’s other Holmesian output. In both cases, the horror/paranormal elements of the story make for far more gothic and shocking mood than usual.

In Sherlock‘s first series, Gatiss proved himself to be masterful at character moments, and the interactions between Holmes and Watson during this episode are some of the best of the second series as they navigate anger, deceit, loyalty, and ultimately, what friendship means to the two of them. Rupert Graves’s Inspector Lestrade makes an appearance that cannot be called anything less than charming, and a few other surprising cameos allude to the overall arc of the series. Of further note is the superb score by David Arnold and Michael Price, as well as the beautiful, sometimes terrifying, and always engaging cinematography.

The Hounds of Baskerville, series 2’s middle child, refuses to be overlooked or underestimated. It stands alone as a fascinating re-telling of a beloved classic, but it also provides a link in the chain of the wider story Moffat and Gatiss have committed to telling through the series as a whole.

What did you think of the episode? Let me know in the comments.

6 thoughts on “The Hounds of Baskerville: Review”